Cloudstaff has really amazing staff parties and there are always great prizes to be won. At a recent Cloudstaff year end party, I won an amazing prize – an incredible adventure to the US and visit Facebook HQ!

We are so blessed and thankful for having this opportunity to see how beautiful America is and able to visit the awesome Facebook HQ – it’s a bit like working at Cloudstaff. I hope Cloudstaff grows as fast as Facebook!

I wanted to share some of the highlights of the journey with you and let you know that amazing things can happen to you at Cloudstaff. We spent some time in Seoul and were able to catch up with some of my relatives. They picked us up at Incheon airport and we took the train to Myeongdong. It is mostly a commercial area where you can see expensive shops. There was one shop there named “Lloyd’s Gift Shop”. Then we went to Seoul tower hoping to see Lee Min Ho but what I saw was Lee Min Shew (my hubby). That tower was really amazing, it felt like we could see the whole of Korea and at night, the tower lights up. We saw the “Locks of Love”, a popular location for people to hang locks that symbolize eternal love. We also had lunch at a Korean restaurant and ate the best samgyeopsal! We really had a great time. We arrived at the airport at 10AM where we were met by my relatives. They showed us around the city. We went to: Twin Peaks, Fort Point National, the Golden Gate Bridge, AT&T Park (Home of the San Francisco Giants), Union Square, Alcatraz, Fisherman’s Wharf, Ghirardelli Square and took a road-trip to Oakland Bay Bridge. We went to Hollywood to see Madame Tussauds, Walk of Fame, Dolby Theatre and had our lunch at In-N-Out Burger. The next day, we went to Disneyland and indeed it was the happiest place on earth. I did not get the chance to see Mickey but I saw Pluto. I felt just like a kid again. We went back to San Francisco for our Facebook HQ tour. We met Brad (a Facebook employee) who showed us the campus. The walls of the HQ were covered in graffiti done by the employees. Facebook HQ is massive —nearly one million square feet. We saw Mark Zuckerberg, wearing his gray shirt and jeans. He does not have his own office just like Boss Lloyd and the atmosphere and setup of their office was just like ours in B4.

They have big pantries and vending machines where you can get food for free. There are a few restaurants inside where you have to pay for your food but most of it was free – from breakfast to dinner.

They also have an IT Team that fix a broken gadget for free – no need to send a ticket and if they cannot fix it, they will change it into a new one. 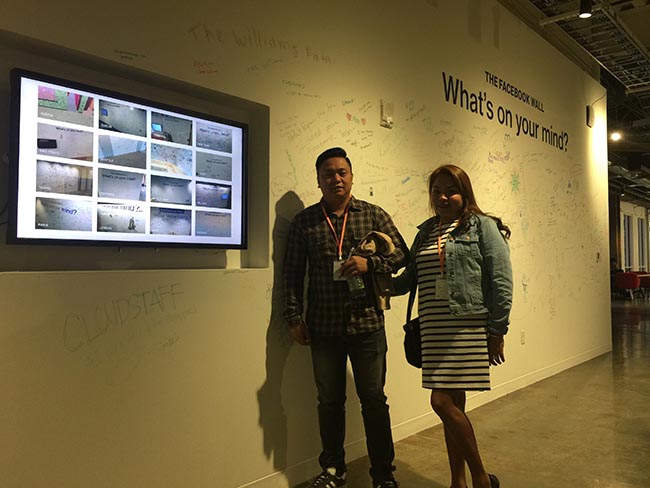 We went up to the rooftop and it was amazing. It is a big man made park where you can see the whole campus and the beach.There was a smoothie bar where you can get juice for free. They also have laundromats, gyms, electric shuttles and bikes.

Facebook campus is getting bigger and bigger and they are building another office beside building 20 which is big as the Menlo Park office. What amazes me is that Facebook HQ is not like an office for their staff. It is like a community where you can do your work stress free. The journey did not end there. We have another two weeks to explore. We are now leaving San Francisco and heading to Las Vegas, then Wyoming and Louisiana. We are making the most out of it!

Thank you Cloudstaff and Boss Lloyd – we feel so very lucky!